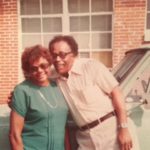 The teachers’ lounge at the elementary school where my parents worked was a multi-purpose room.  It was a break room for the staff, the copy center, the storage room for the snack cart, and a work space.  It was not uncommon for the teachers to share stories about students or classroom experiences while spending time in the lounge.  I guess the lounge also served as a location for informal staffing opportunities.

My father was the principal at Autaugaville Elementary School in rural Alabama for many years.  He came to the school after a stint at the local high school.  It was quite a change in that he had been leading a school for students transitioning to young adult life as opposed to leading a school for those who were just learning the fundamentals of reading, writing, arithmetic, and life.  Daddy seemed to make the transition to little kids pretty easily and for the most part he enjoyed the change of responsibility.  I think Daddy enjoyed parenting and many of his students enjoyed having him as a surrogate father or grandfather.  He had a way of balancing structure, compassion, and professionalism in his role as the chief administrator at the school.  He loved the responsibility of ensuring that the learning environment was safe and ripe for learning every day.  He also loved the way that the young children lived life without pretentiousness or rehearsed behaviors.  Their transparency and naiveté brightened his days and often humored him.

Daddy was a master storyteller.  Unlike Mama whose storytelling was often hijacked by her giggles, Daddy had the gift of gab and loved sharing stories, whether solicited or not.  He would chuckle as he told stories and if Mama was present he would interject, “Ain’t that right, Lola?” Her head nod or affirmative, “Uh huh,” gave his tales credibility.  Once he received her affirmation or any signal of interest from his audience, he would proceed.  The process of getting from the chuckle to the affirmation or signal of intereste caused only a slight break in the momentum of his storytelling.  In fact, it was hardly noticeable.  Next, he would deliver a quick side-grin and another chuckle to push forward his tale.

It was common for me to eat dinner with my parents every evening.  After we were all seated, Daddy would ask me about my day.  He would offer some parenting advice (complete with what often felt like an interrogation to me).  Now that I have worked in higher education, I have realized that there is data that suggests that his practice of encouraging me to talk about my daily activities was healthy and emotionally beneficial.  At the time, I couldn’t wait for his talks to end and for he and Mama to get on with discussing what went on at the school that day.  Generally, that meant I could zone out into my kid world, eat my dinner, and be free of them being interested in my business.  One day, after he was satisfied that I had been sufficiently advised about my day, he started to grin and chuckle.  Based on what I knew about him, there was always an entertaining story behind the grin and the chuckle so I postponed my journey to the kid zone and provided the signal of interest that I knew would persuade him to share his tale.

Daddy said that at some point during the day the janitor (whose name escapes me now) marched into the principal’s office and exclaimed something like, “Mr. Cooper, somebody peed in the mop bucket, again! I’m sick and tired of this!  You have got to teach them a lesson and make them cut it out!”  I can only imaging how hard it was for Daddy to keep a straight face because he almost had a belly ache telling us the nature of the staff complaint.  Mama and I were also in a full on gut wrenching laugh at that moment too.  According to the Mr. Janitor, he walked into the restroom just after the deed had been done and there were a group of boys standing around laughing.  When Mr. Janitor entered the restroom with the plan of mopping the floor with this fresh bucket of mop water, the boys snickered and exited the restroom.  Mr. Janitor identified the boys to Daddy and left Daddy to solve the mystery of who peed in the mop bucket.

One by one Daddy called the boys into his office.  He informed each of them that he was conducting “a serious investigation.”  He told them that somebody peed in the mop bucket and that it was disrupting the workflow of Mr. Janitor and causing a potentially unsanitary condition for the school.  Initially, nobody owned up to the prank.  Since Daddy’s first attempt at discovering the truth didn’t work, he decided to raise the stakes a bit.  He called all of the known participants to his office at the same time.  He expressed to the group the severity of this infraction and explained that more extreme measures would be taken to solve the mystery.

Daddy had been the principal of North Highland High School in Prattville, Alabama before schools integrated and the vice principal at Autaugaville High when school integrated so he had allies throughout the communities of Prattville and Autaugaville.  Heck, he had taught most of the folks in both of those towns.  So, he executed a creative and comical plan to get the boys to come clean about facts surrounding the mop bucket mystery.

Daddy picked up the phone and began to dial a number.  He made certain that the boys knew that he was calling the local health department.  He asked for a person who was more than likely a former student.  He told her that he had a serious potential health related issue at the elementary school.  He went on to tell her that somebody peed in the mop bucket.  He told her how upsetting it was to the janitor and how important it would be for him to be able to identify the student who actually contaminated the mop water.  I would bet that the woman on the receiving end of this call was rolling on the floor laughing as she listened and participated in this “investigation.”  Daddy asked the woman if the health department had a laboratory.  There was an affirmative response.  He repeated her affirmative response out loud so that the boys would be able to remain engaged and follow along with the line of questioning.  I am certain his follow up question shocked the boys who were sitting on edge in his office and caused them to be more anxious.  He asked the woman to tell him whether or not the health department laboratory could take urine samples from the boys and compare the samples to a sample of the contaminated mop bucket water and then tell him who peed in mop bucket.  Who knows if she really answered him or not, but Daddy alleged that she told him that the health department would be able to conduct this scientific evaluation and identify the culprit.  Daddy thanked her and told her that he would be in touch with her later.

Daddy hung up the receiver and explained the situation to the boys.  He explained that they had a decision to make at that moment.  The boys could either tell him what they knew about the incident and solve the mystery or he would be forced to continue the investigation.  With a frustrated tone he expressed how awful it would be for the school and the health department to spend the time and money trying to find out which of the boys peed in the mop bucket.  Clearly Daddy planned this well because he pulled out a small plastic cup and placed one in front of each boy. He summoned Mr. Janitor and gave him a cup to use to collect the specimen from the mop bucket.  Knowing Daddy, he was still layering the magnitude of the associated costs of resources and the fact that their consequences would be greater if the school and the health department absorbed greater expenses.  Just short of leaving his office to provide the needed urine samples, the boys decided to tell the rest of the story.  All of the boys were guilty of the prank (or at least they decided to present a unified front).  Daddy demonstrated relief and gratitude for them telling the truth and moved on to the sanctioning phase.

Daddy asked Mr. Janitor what he thought an appropriate sanction would be for the boys.  As I recall, the boys were ordered to help clean the bathroom so that they would better understand the importance of the work done by Mr. Janitor.  Daddy also wanted to understand the challenges with keeping a school restroom clean.  I imagine Mr. Janitor had to go behind the boys and clean the restroom again, but I am sure he got some satisfaction in Daddy’s response.  Daddy always taught us to respect the role of each person in the village because each person’s role has value.  He taught us to especially show respect for those who cook and clean because they took care of basic needs.  He also said that those who cook and clean did tasks that other people would opt out of because of the difficulty of the tasks or because of pride.

Daddy’s sincere effort to teach his students to respect the role of the janitor and to respect their space had to make Mr. Janitor proud.  I knew that Daddy always respected and appreciated Mr. Janitor and he knew that his actions after receiving the complaint had to reflect those sentiments publically.  It is my hope that as villagers we will find opportunities to lift up those who work with us and around us by the things we say and in the way we respond to them.  I also hope that my audience will learn to respond to childish behaviors with humor and creative teaching moments.