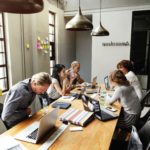 Discussions about free speech and inclusive spaces on my campus presented an opportunity for my division to spend a day in July as a unit challenging ourselves and our peers to think about the intersections of diversity, inclusion, free speech, and respect.  We were asked early in the day to make adjustments at our tables to ensure that everyone at the table  did not work in the same department.  After the informal game of musical chairs ended, about five departments were represented at my table.  Over the course of the day, we were given a number of prompts and asked to consider whether we would describe ourselves as people who spend time making others aware of issues, creating the issues and conflicts others encounter, or whether we involve ourselves in solution driven processes.

At the end of the workshop, we asked each other what we should do next.  We all talked about our frustrations with workshops and meetings that end with some enlightenment and an expectation that there will be another workshop or meeting to discuss either the same issue or another issue without ever receiving a charge to act and reflect.  I presented the idea that I coordinate a monthly meeting for our “home group” as we came to call ourselves after hearing the facilitator say that term once or twice.  I told the group that it had been my experience that topics like race, ethnicity, bias, and inclusion were heavy subjects and difficult for folks to discuss without prior relationships.  Any conversation that feels like judgment or shaming generally end in hurt feelings, an argument, or silence.  None of those outcomes ever produces unity, collaboration, or energetic partnership building.

I made good on my promise.  I sent meeting invites to my group of colleagues.  We had our first “home group” meeting.  It was a lunch time meeting and all were invited to bring lunch and an open mind.  I told them we would have a random topic that had nothing to do with race, ethnicity, gender, inclusivity, or diversity.  We would, however, have diversity in the conversation as a result of our diverse experiences and perspectives.  Early that morning, I spent time in meditation.  The lady who spoke with the calm, consistent monotone cadence reminded me that I had the ability to control any emotion that I felt.  I really didn’t like that lady a lot when I heard and processed her statement, but it gave me an idea for our meeting.

I decided that I would present that idea to the group and start our session by asking them to describe the emotion(s) they felt at that moment.  I knew most of the members and I thought that I could guess which emotions they probably brought with them to the room.  I told the group that my emotion was frustration.  To my surprise, most of the group had some emotion that resembled mine.  There was one person who gleefully owned a perky, upbeat emotion.  In an effort to bring all of us to a place of inner peace, I told the group that we should channel that positive vibe from the most positive group member, hold hands, and take three deep and cleansing breaths.  Once the breathing was done, there were smiles and relaxed faces.

I introduced the random topic of the day: Is there ever a good reason for someone to be late to a meeting or use technology during a meeting?  The questions were paraphrased a bit during the meeting and became something like what excuses are acceptable for tardiness and how do you feel about cell phones and computer use during meetings? Here are some of the things we learned:

We all found the time together beneficial.  It is my hope that at the end of the year we will be able to talk about deeper subjects because we trust one another.  We will become a team of supporters and encouragers.  I also hope that we will motivate others to start similar groups or that our members will facilitate other groups that include other colleagues on campus.  This week I told one of my student mentees about the impact that this meeting had on me as we discussed a professional development program.  He made a note in his planner about the idea and suggested that he might adapt this concept for students.  I’m thinking that we will call ourselves “the home team” moving forward because the thought that the existence of this group gives us some type of home field advantage is appealing to me.

My next task is to decide on a technology challenge to propose to the group.  Right now I am thinking that we intentionally leave our phones in our offices in the off position for half a day or intentionally remove our email accounts from our phones for a day.  I am already feeling angst about either choice, but I am also curious about what will happen for me and others if make a decision to intentionally separate from our devices or email accounts.  It could mean that I learn to stop trying to multitask and that others might learn to wait.  Imagine that!