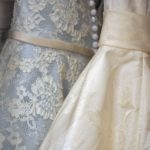 The royal wedding of  Prince Harry and Meghan Markle, the Duke and Duchess of Sussex, brought back memories of the day Princess Diana married Prince Charles.  My mother loved pomp and circumstance.  Emily Post’s book of etiquette and Robert’s Rules of Order ranked just below the Holy Bible for Mama.  So, any wedding peaked her interest, especially one of the royal nature.

Mama loved to dress up and I don’t mean that she played dress up.  Mama loved gowns with lace and sequins.  Mama loved long gloves, fur on her collars, suits, pantyhose, hats,  shoes with heels, and coordinated accessories.  She loved all of those things and some version of each of those things lived nestled in a space in her closet.  Pageantry made her soul sing.  For weeks before Prince Charles and Lady Diana married, Mama talked the coming nuptials.  Her speculation and anticipation about the gown Princess Diana would wear was just one indicator of her level of interest in the royal wedding.

Once Princess Diana’s wedding date was announced, Mama chatted on the phone with her sisters and her friends about the upcoming nuptials.  As the wedding day drew closer, Mama developed the details of her viewer party.  Like a person who simply loved the beauty of a ceremony, she kept herself focused on the only thing that mattered – her having a space and means to watch the big event.  If recorded television had been available at that time, she would have recorded it while she watched it live.

The day before the royal wedding of Lady Diana and Prince Charles Mama, with an excited voice, reminded me of the early morning wedding.  As I recall, the wedding would be televised live at about 2am in Alabama.  Mama asked me if I “wanted” to get up early to watch the wedding with her.  She “asked” with tone and inflections that expected me to say “Of course!”  I disappointed her when I asked, “Can’t we just watch it later.  I am sure it will be shown again at a later time.”

I bet Mama thought it blasphemous for me not to ache to see a royal wedding live.  I knew that there was no way she should have forgotten that I was the daughter who hated lacy skirts, pantyhose, heels, and dressing up. She had to know her persuasive power would be necessary to entice me to sacrifice sleep for a real life fairytale wedding of royal subjects I would never meet.  Heck, I thought weddings in my own neighborhood involved too much time, money, and pretentiousness.  Hence, why would attending a two person viewer party in the middle of the night ever be prioritized ahead of sleep?  The answer was I would and I did because Mama wanted me to be present for that historical moment.

I recalled that piped organ music and the very long aisle in the cathedral worked against me in the battle I fought to stay awake and present.  Although I fought to stay awake and present, I noted that Mama’s expectation that Diana would be a beautiful bride was spot on.  I agreed with Mama that Lady Diana’s demeanor and history as a working class member of her community made the world adore her.  Many around the globe, including me soon found her worthy of placement on a pedestal.  If I had not given in to Mama’s wishes and attended the royal wedding viewing party in our den, I don’t believe I would have become attached to Lady Diana as she became a princess.  Princess Diana and royal family news sparked my interest from that day forward.

Because of Mama, I watched the wedding in real time.  Because of her I watched and I fell in love with Princess Diana.  I paid attention whenever her face appeared in American news.  Because of Mama I fell in love with Prince William and Prince Harry.  I wanted them to be like their mom – gorgeous, generous, hospitable, kind, and approachable.  Because of Mama, I found myself talking to my daughter about developing a plan to watch the royal wedding of the Duke and the Duchess of Sussex.  She and I talked about whether we would be able to stay awake or wake up to watch the wedding if we went to sleep.  I wondered whether the announcers speaking at a whisper and the organist playing soothing melodies from the piped organ would put me to sleep if I woke up.   After attending two commencement exercises in twenty-four hours on opposite coasts to support my children, I succumbed to sleep monster.  I had to settle for my daughter’s enthusiastic version of an instant replay when I woke up.  I offered a little chastisement because she blurted out details about the wedding without any type of spoiler alert.  When I told her that a spoiler alert should have been offered, she basically ignored my statement and continued to tell me everything that I missed.  In addition, she used her cell phone to provide me video footage to support her account of the wedding.  I immediately thought about the irony.  It was ironic that today I regretted missing the broadcast of the wedding in real time when years ago I definitely desired sleep over seeing the live event.  Today, I also realized that because of Mama’s influence I really did want to know details about the wedding.  Moreover, I wished that I could have had my daughter’s testimony: “The Lord woke me up!” I guess the Lord knew I needed rest in order to make it through the second commencement exercise today.  I learned to be careful what I wish for because I got it: Sleep over live television with the benefit of the capability to record the royal wedding. Praise ye the Lord!