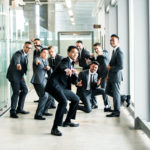 When my daughter was four or five months old, I became a dorm mother to forty-nine boys who were boarding students at an all male preparatory school.  Forty-one of the boys were ninth graders ranging in age from thirteen to fifteen.  The other eight were high school seniors ranging in age from seventeen to nineteen.  Until my life’s journey introduced me to the McCallie School, I thought that boarding schools existed for purposes of good television as depicted in “The Facts of Life.”

At twenty-six years old, I moved into the dorm.  I happened to be the only dorm mother of color on the campus (and the only one of color in the history of the school).  At twenty-six, I had the energy of an older sibling of the boarding students.  My youthful energy paired well with the life experiences of a southern girl raised by a post integration public school system.  My integration into the more privileged communities in my hometown came courtesy of Brown versus Board of Education and school busing.  My integration into the world of boarding schools communities came courtesy of my husband’s job opportunity.  In both settings, differences in lifestyles, in life experiences, and economic opportunities presented as clearly as the fact that I was the only woman with a permanent tan living amidst a community of boarding students.

I have always enjoyed interactions with young people more than adults because young people, in general, carried less baggage and pre-programming than grown folks.  Young people generally welcomed guidance from anyone with a genuine concern for their interests and their safety.  Young people liked folks who made them, their needs, and their development priorities.  I found that regardless of the age, socioeconomic group, or cultural demographic, exposure informed the thoughts and actions of young people.  The really cool finding for me was that my exposure to differences in the students with who I lived and worked informed my thoughts and directed some intentional behaviors on my part.

Once my daughter told me that I was easily entertained like a little child.  I laughed and agreed.  For many years, comments like this on from other grown folks felt like a backhanded compliment.  Later, I realized that more grown folks need to be more like children.  We need to recognize our lack of expertise in any and every subject.  We also need to approach differences in our work, community, or friend circles with the innocent curiosity of a child.  Differences can enhance communities and produce healthier intersections of identities if grown people could be like children and approach the differences with open minds, transparency, a willingness to accept people without focusing on the differences.  Our communities would be enhanced if we found a way to focus on how our personal differences add value to those we encounter or how our personal differences enhance the overall experiences of others.  Maya Angelou got it right when she said, “We are more alike than we are different.”  We will not discover how we are more alike until we manage how we avoid making our differences barriers.

The boys at the boarding school thought of me more as a mom than a dorm mother serving as a place holder for a position simply because I married a man who was the dormitory head.  The boys felt more like biological sons than place holders for empty beds that needed to be filled.  Staying aware of their fundamental needs meant that I had discussions with them about wellness, overcoming family challenges, grades, decision making in social settings, dreams, career goals, and educational pursuits.