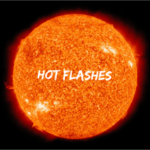 A couple of years ago these sporadic waves of heat came over me.  Since I was approaching fifty, I wondered if the sudden warming within might be the onset of menopause.  Because this heat came so sporadically I had time to forget about one heated experience by the time I had another.  I found myself always shocked by these “personal summers.”

Every time I realized I was the only one fanning myself and sweating I would ask, “Is anyone else hot?”  Whether I was with the young ones at work or home I received a look of surprise and a reluctant, “No.”  Their faces were almost apologetic and curious at the same time.  I tried to explain how this warming sensation was different than the heat I felt while standing in the sun.  This type of heat originated from a cell deep within my body and warmed up like the coils on an electric stove becoming red enough to boil water.  The cell became a red hot coal unleashing fire and heat into and through my shoulders, chest, neck, and head.  The simultaneous eruption of salt water from all of my sweat glands has never come at a convenient time.  I always found it an unwelcomed disruption.  I also wondered whoever called them hot “flashes” must never have had one like mine.

The hotness never resembled anything quick or hurried.  The ember that produced the internal heat wave hung around and increased the mercury inside like the heat that lingers over asphalt on a hot day in a southern city.  There was no hurried or zippy pace.  There was no flash.

Prior to last weekend when I visited a Midwestern city, my experience had been my months would pass between these mid-life change episodes.  Last weekend, however, the frequency increased and my family noticed the changes in my behavior as a result of this hot flash madness.  Like other disruptive unexplainable moments in my life I found that humor made even hot flashes more tolerable.  During my visit, I hung out with family.  While we were out having lunch, there arose a heatwave.  However, this time it wasn’t me reacting to the surprise attack of a private summer.  It was my cousin, Lisa.  As she was telling us a story about something she eased her hand inside of her handbag, pulled out some type of lanyard, and hung it around her neck.  It took a second before I saw the motorized fan hanging at the end of the strings.  Oh my gosh!  Did she just pull out a fan?  We made eye contact and started to laugh as I struggled to ask the question that had an obvious answer because I could see the fan resting on her chest.  She obliged me by answering with a “Girl, yes!”  Then, everyone at the table roared with laughter, men included.  I said, “Girl, that’s a big fan.  Does it have rechargeable batteries?”  She laughed more and said, “No,” as she reached into that handbag again.  This time she pulled out and held up a pack of double A batteries for all of us to see.  At that point, I was laughing so hard my stomach was aching.  When the laughter quieted a bit, I asked, “Is that fan color coordinated with your outfit?” The head shakes and chuckles continued.  She answered in the affirmative then showed me a picture of her colorful fan stash.

Lisa and I were near the same age and we spent time together during summer breaks as children.  It was so cool to see that we still had the same sense of humor and the ability to laugh at ourselves.  Her transparency led to more stories about our personal summers.  We talked about the blessing of the thermostats in our homes.  We laughed about how we could care less what other folks in the house think about our thermostat adjustments when we are overcome by that heat.

I started to tell the group about my challenges at work with finding ways to adapt to the heat when there’s no thermostat.  I laughed about the coaching I received from a mentor about layering my clothing so that I can discreetly remove layers in order to cool off, if needed.  Lisa shook her head in quick, short movements left to right as she added something like, “Girl, no.  Skip layering.  I just go sleeveless” (of course accessorized with a colorful motorized fan).  The male cousins at the table were shaking their heads and offering guttural deep chuckles as if they were trying to just eat in peace without hearing our testimonials.  I knew they were engaged because I heard the chuckles that escaped them despite of their efforts to contain them.  I think their interest and entertainment fueled my desire to tell one more story.

The final hot flash testimony related to another work experience.  One day the guys from facilities came into my office to tell me that they completed some work on the building that revealed that there was water in the radiator lines for my floor.  They seemed pretty happy about this revelation.  All I wanted to know was how that impacted me so I asked, “What does that mean?” He proudly announced, “Now, your radiator will work and you will have heat in your office.”  As I recall, someone from my staff was in the door with a Cheshire cat grin because they knew about my special relationship with heat.  With concern and a sincere impassioned plea, I begged facilities dude not to fix what was broken.  He continued to bask in his proud discovery and he assured me that the radiator was fixed and operational.  He even asked me to walk close enough to feel the heat from the radiator.  I stopped the madness and said, “I appreciate your work, but I am a pre-menopausal woman and I don’t need any more heat.  You can turn this off now.”  He laughed along with my staffers who gathered to witness my one-woman comedy show.  He left and returned early the next day.  I said something sarcastic like, “Why did you come back? To make sure your heater was working?” Again, he laughed and responded, “Nope.  I have a work order to shut off your radiator.”  I gave praise and listened to the giggles in the distance.

My daddy used to say, “Just keep living.”  I understand what he meant now.  If you keep on living, you may own the testimony of your elders.  I remember my mother sweating out her natural having hot flashes and now it’s me trying to iron out my edges after a few personal summers.  I am so thankful that I have found friends and family to join me in a light-hearted way to deal with this mid-life challenge.  If you have a testimony to share, please do so whether it’s your own story or a funny one you witnessed.  I love to laugh and I will be using laughter to get through all of the hot spots I will encounter on this journey.