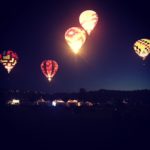 Peer pressure is not just a thing with middle school children and college students.  Peer pressure can influence the decisions of adults like me too.  The people native to Northern Nevada look forward to The Great Balloon Race every fall.  The balloon owners and their crews arrive in the area several days prior to the Saturday race events.  Even though the press reminds the city of the balloon race events, I forget about the race every year until I see the balloons in the sky on my drive in to work.

As a migrant to Northern Nevada, I had to work to figure out why everyone was so excited about the The Great Balloon Race.  There is childlike excitement in the community when people discuss the race.  Prior to the balloon race experience, the only time I had ever seen grown ups so excited about something that seemed like just a good time for kids was the anticipation of going to a world renown amusement park to visit the world imaginary animated characters. There is something about balloons that converts grown people to kids. Until this year, I passed on the opportunities to wake up a 4am and get to the field near the park to reserve my special place to watch the early morning light show performed by the dawn patrol squadron.  I generally make it my business to take part in the traditions of the city in which I find myself, but that 4am wake up call has been a deterrent for the last three years.  In addition to the early wake up call, the temperature had been low and and I didn’t have a crew to hang out with to take in the tradition.  As a result, it was easy for me to sleep in and go out to field late morning to experience the balloons and the fanfare in my own way.

This year I made a new friend.  The new friend has been a mentor to me, but I didn’t know until Friday, the day before the great race, that she has hosted a party at her home to celebrate the event for many years.  After receiving an invite less than twenty-four hours before the great race, I began to wrestle with the idea of whether to go to the race just so that I could say I did it.  A few times during the day Friday I said I didn’t want to go because I had a long work week and I was tired.  It was easy to justify sleeping in Saturday morning and not attending the race.  Every time I said I didn’t think I would go to dawn patrol or the house party someone would tell me that I should go because it was fun.  My friends encouraged me to go and then Friday evening my son added his opinion that I should go to dawn patrol.  They led me to believe that this was my year to get up early Saturday morning and find out why people have established a ritual and tradition of getting up for dawn patrol.

I went to bed Friday night still undecided about whether to get up for dawn patrol or not.  Honestly, the peer pressure was getting to me and the balloon race was at the forefront of my thoughts when I went to sleep.  As a result, I woke up almost every hour checking the clock.  I didn’t set the alarm clock because I figured that if I slept past 4 or 4:30 I would have a excuse for not going to the party.  After waking up several times throughout the night, I decided that I would just get up, collect some warm clothing, and a blanket then prepare to experience something new.  Not only did I go, but I fed Swaggy earlier than normal, gathered his harness, his leash, and his fleece sweater.  Swaggy and I headed out into the darkness looking for my friend’s house.

It was good for me that I didn’t live too far from my friend’s house because the foot traffic increased as I got closer and I had to exercise more caution in the darkness.  My friend warned her guests that the streets near her house might be blocked and that we should bring the invitation along in the car.  The traffic flow became more and more congested the closer Swaggy and I got to her house.  After waiting patiently in a long line of cars as I approached her street, I realized there was a traffic guard stopping cars to ask drivers to explain where they were going in to neighborhood.  When I told the man that I was going to my friend’s house and showed him the invitation he said, “Oh you’re good to go.  That’s a really big party.”  During the trek to her house I saw people walking briskly in the darkness on a mission to get to the field before the dawn patrol show.  People carried coolers, blankets, coffee cups, and folding chairs.  They wore pajama pants, sweat pants, jeans, sweatshirts, coats, and hats.  There were groups of people who appeared to be family members and some seemed like friend groups.  They walked, talked, and laughed while they hurried toward the field.  The ride to the party helped me understand the unifying power of the balloon race.  I began to realize the wonder of The Great Balloon Race.  The race presented an annual event for friends and families to celebrate having friends and family.  Although the dawn patrol show itself took less than thirty minutes, the preparation for the event by spectators was an investment that paid dividends in bonding and relationship building for thousands of people.  Once the dawn patrol show ended, the sun rose and the highlight of the day began for me.  I forgot about being sleep deprived and enjoyed laughing and talking with some friends I already knew while making new friends.  I can’t say that I will look forward to an early rising next year to attend the dawn patrol race.  However, I am looking forward to having breakfast in my friend’s backyard next year with all of the folks she calls friend.

This was the 35th Anniversary of The Great Balloon Race.  The announcer of the dawn patrol show said that the Northern Nevada show is the favorite of the crews and pilots.  Who can’t get excited about a crowd of thousands of people welcoming you to a city to celebrate an aeronautical sky show with crafts guided by the wind and skilled pilots who have no steering wheels?  This event raised money for scholarships for college students.  Because of the sponsors and donations of those in the community the event is free to attendees.  The Great Balloon Race unified a community of people from varied backgrounds if not forever for a few hours and that was enough reason to participate.