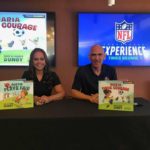 I met the Dungy’s when my family moved to Florida (the first time) in 1997.  Lauren and Tony became friends and role models who I admired and respected.  Lauren and Tony consistently demonstrated passion for teaching and encouraging young people.  They also encouraged people who sought support for the young people in their communities.  Those of us who had children grow up in the game thought it cool that children were generally welcomed to spend time with their fathers because Tony made taking your children to work a common and accepted practice.  It was cool to witness children running around an NFL office making themselves at home.  Tony knew how much time coaches spent away from their children so our children who were raised in the game felt welcomed at the office, on the field, and often in the locker rooms.  Tony and Lauren always made the children believe that they mattered.

As I read this book, I recalled partnering with Lauren and a group of other women to make monthly visits to area elementary schools to read books.  Once Lauren noted that the books I chose to read  offered history lessons or life lessons on manners.  In my opinion, there was nothing better than a good children’s book to bridge the gaps between adults and children or to teach children about world and life issues.  Good books used words and illustrations that children could understand.  When it came to books, I looked for children’s books that told relatable, instructive stories.  “Austin Plays Fair” lived up to all of the elements of a excellent children’s book!

The story opened near the end of a flag football season.  The featured team, coached by Tony and Lauren, had not won a game and children on the team were disappointed with their losing record.  Austin played on the team that needed a win.  His team, the Trentwood Tigers, wore bright orange jersey with gray sleeves that coordinated well with their darker gray shorts.  The flags around their waists looked like yellow highlighter strips against the gray shorts.  Although they looked fabulous, the children focused on their losing record.  The encouragement of their parents didn’t eradicate their feelings of disappointment and frustration.

One of Austin’s teammates, Brice, proposed a sneaky plan that involved the members of the team tucking their flags inside of their belts to prevent the flags from being pulled away from the belt by an opponent.  Brice believed that if all of their flags remained attached to their belts during the game, victory would be certain.  Well, Brice convinced the team to execute his plan in the next game.  The team won that game.  The children celebrated the victory, but Austin felt less than a winner because he knew that they cheated to win.

Since the plan resulted in one win, Brice argued that the team should continue this tactic in order to be the victors in the next competition.  Just when it seemed that all of the Trentwood Tigers bought what Brice was selling, Austin spoke out against the plan.  Austin began thought about things his parents and his coaches said to him. His parents told him “You just need a little more practice.” They also reminded him that “Having fun is more important than winning.”  Moreover, the words of his coaches resonated with him too.  Austin especially remembered Coach Tony’s statement that “it’s important to have fun, but it’s even more important to play a game you can be proud of.” I have to admit that I was pretty convicted myself after those reminders on good sportsmanship and playing a game with integrity.

Austin made me think through my gaming strategies a bit.  My father said have fun, but he also absolutely set the standard that winning was the paramount goal.  My father used to say that he coached “a good clean game of dirty ball” which established a very different standard than that of Coach Tony and Coach Lauren.  I was raised by the guy who coached his team to bump my brother, his son, at the start of heat when my brother ran track against my Daddy’s teams.  My daddy won a lot when he coached track and basketball.  He admitted that he sent players into games for the sole purpose of getting “good fouls” designed to upset the performance of the best players on the opposing teams.  Recently, I played Ellen’s Headsup game with the women’s basketball team on my campus and they were convinced that I cheated.  They also accused me of not telling the truth on Twitter.  I guess I borrowed from my daddy to get that extra point and I used a lesson from Coach Tony to formulate my tweet.  Coach Tony taught me years ago that “perception is reality.”  So, I told the women that I didn’t lie to the world because my tweet didn’t say that I won.  I did, however, imply that I won the game.  I read this book this morning and got more convicted, but not convicted enough to delete that tweet.

It’s a good thing that Tony and Lauren wrote this book to remind us about playing fair and having fun.  I had fun playing my game, but demonstrated that I might struggle with one of the challenges faced by many folks – losing with integrity.  We tend to justify our shortcuts or lapses in integrity by accepting the excuse Brice credited his brother with saying: “everyone does stuff like that.”  Austin’s decision to choose more practice, honest play, and hard work over cheating to win demonstrated maturity, integrity, and a willingness to comply with the rules of the game.  Austin showed great courage when he took a stand against “flag gate” and when he held his team accountable for cheating.  Ultimately, Austin proudly stated that “It would have felt good to win, but it feels better to play fair.”

I highly recommend this book and the series of books recently released by Tony and Lauren Dungy.  Don’t be surprised if while you are reading this book to a child you learn valuable life lessons that you can apply in your life.  This book inspires me to 1. want to write for a younger audience and 2. to share this book with children in my community.  I hope you will purchase a copy and share it too.