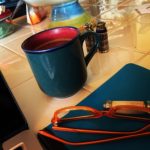 Thoughts about aloneness have been a recurring theme for me over the last few months.  The reality of a new life with much time alone became my unsettling truth over the last few weeks.  One of my dear friends, Carolyn Newton Curry, Ph.D., founded a non-profit foundation named “Women Alone Together.” (See www.carolyncurry.net).  As I sat in my aloneness, I thought about Carolyn and her passion to encourage and support women who are “alone.”  Carolyn and I became friends the first time (of three times) her husband, Bill, hired my husband, Ricky.  That was almost thirty years ago.  When we met in 1989, I was a young law student and a newlywed.  Like children watching the grown folks who live around them, I watched Carolyn.  Carolyn’s genius must have been filtered by her hospitable, thoughtful, warm spirit.  Bill always said that Carolyn was the smart one, but I didn’t see her brilliance until years later.  True to the life of a “sister in the shadow” of her partner and a business she didn’t control, Carolyn balanced her support roles as a wife, mother, and mentor while limiting her talk about her really cool academic endeavors and her passionate pursuits.

Carolyn and Bill helped me grow up in the business of football.  They taught me how to survive many of the challenges of the business.  More recently, I realized that Carolyn began teaching me about the aloneness in the game of life many years ago.  In 2002, when Carolyn established this organization, I was in my thirties.  I was married to the business of football with two small children.  As I recall, I learned about Carolyn’s organization from an excited Bill.  He expressed his excitement for Carolyn and his excitement about the mission of the organization.  Carolyn states on her website that her organization “provides confidence and community to women who are ‘alone’ for any reason.”  At the time Bill told me about “Women Alone Together,” I thought my mother who had become a widow in 1997.  At that time in my life, with two young children in tow, I welcomed a moment alone.  In fact, as I made plans for the kids, I scheduled in some alone time for myself. I kept the plans of my alone time in mind when I planned trips, activities, and bed times.  Alone time was a goal.  It was necessary and I embraced it like a warm cup of tea on a cool morning.  Then, 2015 arrived and that vision of aloneness transitioned itself from a place in the distance and into my personal space.  All those years later I missed some aspects of being busy with little time alone.  Watching aloneness force change felt as comfortable as premenopausal hot flashes.

Sometimes I think that I think too much.  My life in the shadows fixing other peoples’ stuff mandated thinking through the stuff and planning stuff and just dealing with stuff.  There were times when I wanted nothing more than the noise around me to be silenced.  I wished for the exterior things that drove my thoughts and expended my energy to allow me to simply relax into a quiet space.  The closer I got to the goal of time alone my codependent relationship with fixing people and stuff and the need of people and stuff to be fixed by me became more obvious.  Suddenly (or so it seemed), my expectation of alone time changed from a quiet, refreshing retreat to a dreaded isolation and stillness.  I feared the judgment of the quietness.  I resisted the inevitable maturity and independence of the babies I raised.  I resisted the blessings that flowed when I held their feet and prayed over them at night.  I fought the internal battle between the celebration of the crop yielded as a result of my timely planting and my tireless tending of the garden and that time that came after the celebration of the harvest.  I never expected to live this picture of aloneness that I see now.

A few weeks ago, I said, “Alone sucks!”  I meant it with every fiber in me that day.  I spiraled into a pity zone where feelings of frustration, regret, second guessing, and wishful thinking live.  My spiral didn’t fee like oil in a cylinder though.  It felt more like a pinball hitting the obstacles inside of the pinball machine after being launched from the flippers.  I wanted no part of this kind of alone time.  What irony!  I finally had what I wished for and now I wished only for a different dream.  Is this what the cliché that “Life comes full circle” really meant? Was this the season to learn to “live off the land?” Was this supposed to be my time to “live off the increase?” Or, was the lesson to just “be careful what you wish for?” Once I stopped the stupid spiral, I owned all of the decisions I made that contributed to my journey to this life alone.  Some might argue that I am not alone because I have a husband and kids and my beloved Swaggy.  Right now, however, they are away on treks of their own.  As a result, I sit at a table with a journal, an empty coffee cup, a cell phone with a blackened screen listening to my breath and the pen scratching blue ink on this page.  I am alone.  I am alone with my thoughts.  I am alone to contemplate change.

In the aloneness, I have spent time revisiting my life journey.  Over the years, it has often felt like a series of detours to me.  My recent self evaluation yielded a finding that the symbolism of the circle in the cliché about things “coming full circle” accurately described my journey.  There was a momentum building from the trajectory of being catapulted into each detour.  Although I gravitated toward the fear in being propelled into orbit, age and experience made me appreciate the feeling of freedom offered by the launch.  Those times that shocked my senses the most also aroused the most intense feelings of aloneness in me.  Those times that registered more on the side of lonely than leisure on the aloneness meter I named.  The latest arc on this circular life orbit was named “My desert experience” representative of the time in my life when I was removed from almost everything and everybody with deep familiarity.  In the desert, I didn’t find my voice because I always knew it was there.  In the desert, I found the alone time I needed to practice listening to my voice without the distractions of the codependent relationships I felt called to make priorities in my life in the past.

I have decided that the tug of loneliness may introduce itself into my quiet time for as long as aloneness is a thing for me.  I have also decided that the length of the visit is a choice determined by me.  Instead of seeing this part of my journey as closure to the circle, I see that my life has been a series of small circles linking me to this time to be alone so that I can work on mastering the management of the gift of time itself.  I want my audience to consider as I did the personal responses to alone time and whether the responses directly relate to the reason we find ourselves alone.  Consider the benefits and burdens of being alone.  Then, find support to increase the benefits and solutions to help lessen the burdens.